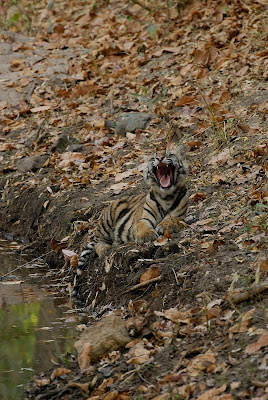 Vijaya’s cubs were seen late this morning wandering amongst bamboo cover near the roadside beyond Chorbehra Dam. Eventually they settled near Chorbehra Dam in a small natural cave shrouded by vegetation of bamboo and trees to sleep. There mother had been spotted through dappling cover of leaves settled to rest the rising heat of the day away nearby at Jumunia.

By late afternoon the cubs were actively awaiting their mothers return, exploring a little and inquisitively looking about. They appeared a little hollow bellied seemingly they had not eaten lately. Two of the cubs sat and explored around the cave below peeping out occasionally while the third the more playful of the three sat above on the rock tail tangling down to its siblings like a playful string. At times this little cub chewed at bamboo and shifted about trying to gain a good position of comfort while awaiting its mothers return. Sitting dog like on its haunches staring down at two siblings the naughty cub almost jumps down to join them but changes its mind and settles again to doze as the light fades and the stillness of the night forest approaches.

No one is sure yet if there are two males and one femaleor two females and one male but for sure one has been confirmed female and one male so far. Hopefully their proud and attentive mother will kill tonight and their three hungry mouths will be filled tonight?

Next day morning no sign of the cubs but mother was far away in Sidh Baba. Perhaps she has killed again and moved her small family on to a new kill. Then in the afternoon three little cubs were found resting peacefully on the banks of a little dammed pool made up of seepage water from the surrounding hills. All three seemed content to sleep away the afternoon as they once again awaited a mother’s return. Though the two cubs that slept furthest away looked full bellied the little female that acted more confident and inquisitive than her siblings looked hardly full. However, it appeared that all three must have eaten something?

As the minutes and hours ticked by the two slightly larger of the cubs that are perhaps both males came onto the pool and greeted their sister before slipping into the pool and using it as a toilet much like naughty children might do in a bath before striding through the water and settling again on the opposite bank for more rest and discovery. As the hours drifted on and boredom became an issue little faces gave enormous gapping yawns and all three cubs slowly began to explore and play. Stalking up on each other before pouncing and box fighting, picking up twigs as toys to play with and generally making joy in their lives. Cat antics enjoyed by all three before finally rushing off in chase to disappear from view as light faded across the forest and chital called nearby for the return of their mother the tigress Vijaya.