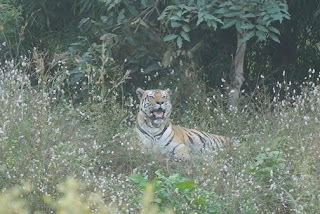 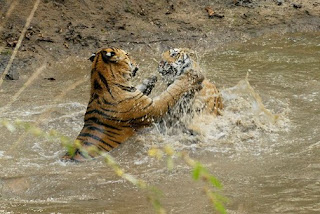 So the year is again over and many changes have occurred in the park since it opened in mid October.

First, the young male tiger known as Kallu has disappeared. No one knows his fate, perhaps he will reappear one day? Second B2 has reaffirmed his presence in the Ghorademon and Banbehi area now the young pretender is no more. Third, Chakradhara's 14 year old tigress Pyari and her three cubs are gone from the Tala Zone for good. No one knows where the four are and no one in authority seems that concerned. Fourth, Rajbehra has been taken over after Durga's death by one of her daughters we now call Jaya(D5). Fifth, the second daughter now called Vijaya (D4) has taken Chakradhara and also pushed Lakshmi to the very edge of her territory in Chorbehra and Dobhiakhol.

This is by far the most serious news as poor Laksmi is now spending alot of time outside in Khitauli Range over the main road and last week even entered Tala Village. She had killed a cow and by 11am the Forest Department were on her tracks. They attempted by elephant to move her away from civilization and in doing so annoyed her so much that she attacked and killed a man while fleeing the nallah area in which she felt safe. The man was bringing wood to the village by his usual hidden route unaware of the drama being played out nearby. Poor Lakshmi and her cubs then spent a night behind old Jungle Camp after which they entered Taj properties before being forced back into the Tala Range on 29th Dec. Resting up at Chorbehra they were "tiger showed" to VIP's yesterday and also to unexpectant C route vehicled tourists before being moved on by Vijaya in the night. Today Vijaya was seen feeding on Lakshmi's smelly cow kill remains. For Lakshmi times are hard. Her limp is very bad now and she has little means to protect her cubs. It will not be long before she is again outside the Tala range and feeding on cows by the roadside or at the back of Tala village. Her problems have yet to be resolved and it will be interesting what action the Forest Department now take to continue her and her cubs survival.

As to the other tigers in Bandhavgarh all seems well. Indrani and her four cubs are regularly seen both in Magdhi and Tala Zones and so too Tulsi and her three very active youngsters in Milchaini. Shaki/Bhoka is seen and so too Shashi/Bamera though not too often. And finally, the Banbehi young tigress we now call Wakeeta (R17)probably the most difficult tigress to see is also doing well. All in all though changes have occurred Bandhavgarh still continues its magic and drama so let us see what follows in 2011?
Posted by Kathleen Mary Hassall Tiwari at 3:34 AM 2 comments: 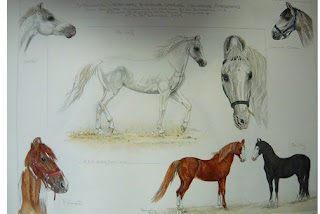 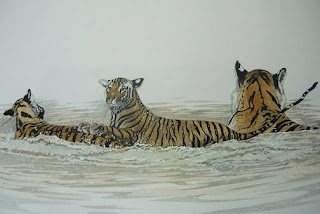 Posted by Kathleen Mary Hassall Tiwari at 4:47 AM No comments:

Labels: Tigers in Bandhavgarh and Stallions in Dundlod, Two of last seasons images 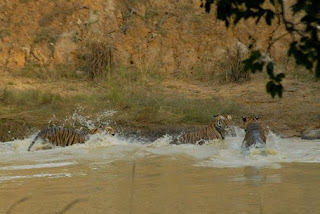 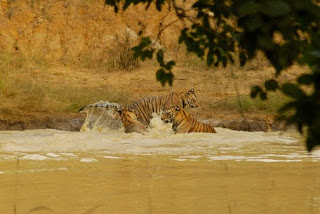 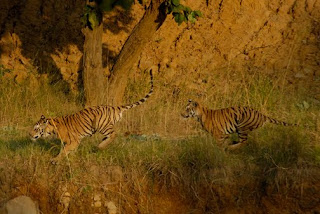 Posted by Kathleen Mary Hassall Tiwari at 3:39 AM No comments:

A New Season Ahead

Gosh how time flies. Its already nearing November end and I have not written in months. Things are very different in the park this season. With the loss of the tigress Durga and the fact that Pyari and her cubs are gone from the Tala Range mean there are many changes taking place amongst the tigers in Bandhavgarh. However thankfully B2 Sundar is hanging on to some territory even though he is being pushed hard by P10 Shashi. We thought perhaps T1 Kallu would push him out of Ghorademon during the monsoon but this seems not to have happened and good old B2 is still walking Banbehi, Ghorademon and Milchaini. He had a few cut injuries recently whether from a fight or an encounter with a few cows no one is quite sure but he seems fine and no tranquilizing or stitches has stopped him going about his business.

I have little news of either Bohka/Shaki or the other young males T2 Kallu's brother or D3 son of Durga. No sightings or so few to be sure what is happening. We will have to wait a while longer to see if any are still roaming the park at ease?

As too the tigresses. Lakshmi our limping Lady is still managing to bring up her family. She is quite amazing but her limp is no longer a limp but a hop on three legs. However with the help of the Forest Department the cubs look pretty good. Both Indrani in Mahaman and Tulsi in Milchaini are fine too. Still raising full families and seen fairly regularly. In fact Tulsi's three are the main stars of the park right now. Great sightings at the pool playing and in the meadow carrying a dead monkey. I am afraid however that 14 year old Pyari seems to have left the park for good and allowed the young tigress D4 daughter of Durga to take control. This little tigress is pushing Lakshmi in both Sidh Baba and Barua Nallah so I hope Lakshmi can hold her own under her injury? D4's sister D5 has taken her mothers territory in Rajbehra and though seldom seen as yet seems content to stay. I have named Durgas daughters with a name related to Durga and the meaning of Victory. D4 being called Vijaya and D5 Jaya. A third young tigress R17 daughter of Reshma is in the hills around Banbehi. She was said to have eaten a poisoned goat recently but survived due to the intervention of Forest staff. I have called her Wakeeta meaning beautiful flower. Its a Sanksit name. You may think I should not name these tigers so but I use the mothers intitial to keep track of their cubs and what happens to them. Hence I have to search for names starting with unused letters of the alphabet when new tigress settle. You might have recognized however that all the male names begin with S! And finally Chameli in Magdhi range is fine too and seen with four cubs not three!

So things look pretty good for the park in the future with three young tigress settling inside Tala range. However there is a huge worry about the actual prey base right now as more and more cows get taken from around the perifery of the park and the tigers continue to hop over the fencing to visit the villages by night. Difficult to say what the future holds and as we all know so few of the youngsters ever survive if they go out beyond the Tala area.

More again soon but meantime a couple of pictures from my recent siughtings. Not great photos but great to see. Hopefully the artwork will be better?
Posted by Kathleen Mary Hassall Tiwari at 3:06 AM No comments:

I recently spent twenty days in the park assisting a Wildlife Photographer Kim Sullivan. She has over the years become a friend and during her three week stay with us at Skay's Camp we thoroughly enjoy the jungle together. Times have changed alot over the years and now the cost of hiring elephant for photography is per individual rather than for the elephant. Therefore I had no chance to go on elephant during this whole time. However, this was no worry as the road sightings were incredible and many of them witnessed by the usual small crowd of tourist vehicles.

Much of our time was spent tracking the cubs of the Milchaini female Tulsi or the Chorbehra female Lakshmi. It was interesting to watch the interaction between mother and cubs and also times when males called by. Earlier I posted pictures of the male tigers T2 known locally as Kallu being intimidated by his mother but we also saw him alone enjoying the damp meadow grasses and frolicking on his back like a young domestic cat! The new Bamera male as he is called locally also called by on the Chorbehra cubs. He is their father and it was quite telling to see him simply stroll past the two as they sat in cover and then follow him a few yards up the river bed as he disappeared into Sidh Baba. This big male tiger is seen more and more in Tala Range because he is pushing B2 Sundar from his territory. B2 has already been forced out of Chakradhara meadow by P10 Shashi (Moon as we call him because he usually walks under the moon) and is now making inroads into Bhitri and Barua Nallah. He is also pushing Shaki/Bhoka too and has obviously taken Chorbehra and Dhobiakhol from this older male too. Though we did not see Shaki he was seen by others mainly resting in Rajbehra or on the move at the edges of his territory in Susiyari and Mahaman.


Posted by Kathleen Mary Hassall Tiwari at 1:22 AM No comments: 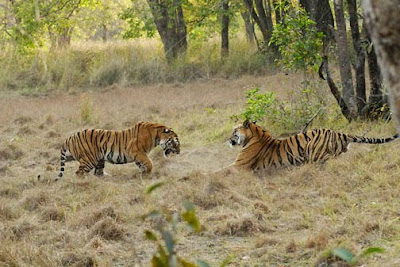 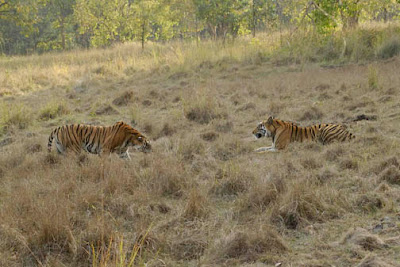 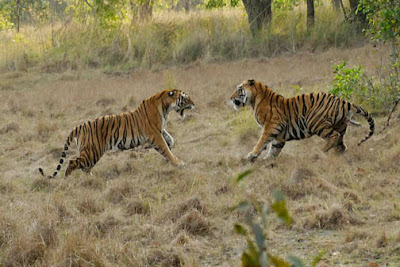 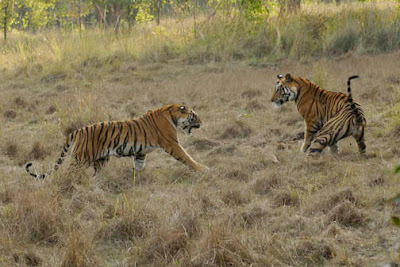 Hello again all. Its been ages since I wrotwe on my blog and now I have decided that I will post pictures here and text. Here are a couple of rather exciting pictures recently taken of the tigress Tulsi seeing off her now last litter male cub. He is a transient male now with no real territory and when he heard his mother coming and calling he called back to here like a small cub. She did not want him around at all because her new litter of three were there too. This poor boy was really shown his place. A few days later he was seen being intimidated by B2 which though I missed I heard about and it sounded amazing as a sighting. Certainly things are interesting right now. Even we have heard that sightings have been made of the new litter of Durga. She has three very small cubs hidden away in Badhaini. Her older litter daughter is still in Rajbehra. It will be interesting when the watehole Durga is presently using dries up and she has to take her new litter into Rajbehra. B2 is still about but his son P10 is now in Chakradhara and extending his range. For sure Bandhavgarh is in a time of change.
Posted by Kathleen Mary Hassall Tiwari at 6:13 AM 1 comment: